For information about COVID-19, including symptoms and prevention, please read our COVID-19 patient guide. If you need to see your provider, please contact us to see if a Video Visit is right for you. Please also consider supporting Weill Cornell Medicine’s efforts against the pandemic.
Department of Anesthesiology

Calcium-gated potassium channel MthK in closed, open and inactivated states, from left to right. Channel structure (blue), with one subunit removed for clarity; calcium ions (yellow); potassium ions (purple); membrane (grey); N-terminal inactivation peptide (red).  The location of the peptide in the inactivated channel was identified in the structural analysis, whereas the location shown in closed and open channels is hypothetical. Image courtesy of Dr. Crina Nimigean.

Ion channels, which allow potassium and sodium ions to flow in and out of cells, are crucial in neuronal ‘firing’ in the central nervous system and for brain and heart function. These channels use a “ball-and-chain” mechanism to help regulate their ion flow, according to a new study led by Weill Cornell Medicine scientists.

The study, published March 18 in Nature, confirms a long-standing hypothesis about ion channels, and represents a key advance in the understanding of the basic biological processes at work in most cells. 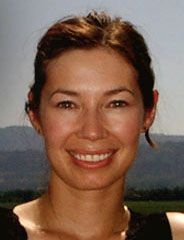 The direct imaging of the ball-and-chain mechanism, using electron-microscopy techniques, can also provide a new angle to design drugs that target it to improve ion channel function. Ion channel abnormalities have been linked to a long list of disorders including epilepsies, heart arrhythmias, schizophrenia and diabetes.

“Scientists have been trying to get an atomic-scale picture of this mechanism since the 1970s, and now that we have it at last, it can become an important drug target,” said senior author Dr. Crina Nimigean, an associate professor of physiology and biophysics in anesthesiology at Weill Cornell Medicine.