Dr. Alex Proekt is Part of Team to Publish New Insights into How the Brain Recovers from Anesthesia

How do we “wake up” after being given an anesthetic? Scientists had assumed that the process was a gradual one of the brain returning to full activity as anesthetic drugs dissipated (washed out) through the body. Research conducted by a team at the Donald Pfaff Laboratory at Rockefeller University, including lead author Alex Proekt, MD, PhD, Assistant Professor of Anesthesiology at Weill Cornell Medical College, and former Van Poznak Research Scholar Andrew Hudson, MD, now points to a much more complicated reality. The team’s findings were published by the Proceedings of the National Academy of Sciences (PNAS). 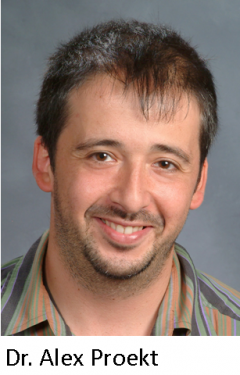 Dr. Proekt and Dr. Hudson (University of California Los Angeles), along with Diany Paola Calderon, PhD (UCLA) and Donald W. Pfaff, PhD (Rockefeller) conducted research using isoflurane to anesthetize rat subjects and monitor their recovery from various dosages of the anesthetic. The team monitored local field potentials (LFPs) - the electrical potential existing outside neurons – and thus could monitor the neurons’ activities as the subjects moved from an anesthetized state to wakefulness. They discovered that rather than a gradual process of recovery, “the brain passes through several discrete activity states.” Recovery is a stepped, rather than gradual process. As Dr. Pfaff explained, “our research shows that the recovery from deep anesthesia is not a smooth, linear process. Instead, there are dynamic ‘way stations’ or states of activity the brain must temporarily occupy on the way to full recovery.”

The team’s findings illuminate not only how the brain recovers from anesthesia, but also can potentially shed light on how the brain functions and recovers from other states of interrupted consciousness, including brain injuries. Since the PNAS publication, their research has been covered and discussed in several media outlets.